If you told Me I’d be shitting on a man’s willing face back when I was a blossoming Mistress, I’d not have been too surprised but I’d wonder how I got there.

The Funny Side of Scat

But the scat play that I saw in both grade school and high school was some of the funniest shit I’ve ever seen. There was the occasional mural an anonymous girl did in the bathroom on several occasions: she’d rub shit all over the bathroom stall doors-- the front and back - all of them. She’d rub that dung all over the toilet seats and the toilet roll. Was she angry? Was she conducting Her own one woman dirty protest? I have no idea. But what I do know is that as abnormal as it was to see, it was absolutely hilarious, and even though We’d ran out not being able to use the toilets out of fear, and the smell, we’d laughed hysterically about it. Did this make the virgin Mary cry? Had she sinned?

Then there was Catholic high school. Ah yes, freshman year, the beginnings of trying to embrace My atheism. It wasn’t far into the year when another anonymous girl had filled all the soap dispensers with shit. As Someone very keen on hand washing, I was naturally quite pissed off! Was she conducting her own form of guerilla warfare? Was it some sort of avant garde protest satirizing the Catholic obsession with women’s ‘purity’.

Now, I don’t mean to condone the imposition of scat play on non-consenting individuals. you did, however click on this blog post. So chances are you’re at least into it, or curious about the taboos surrounding it, or why I enjoy granting toilet slavery sessions so much.

I’d already been giving golden showers for a long time. And I found it super sensual to have someone drink My golden nectar. I’d heard many Mistresses couldn’t even give golden showers nonetheless full toilet slavery. They’d freeze up, get embarrassed, etc. Everyone has their limits, so be it. But for Me, I wanted to bust some of Mine down. I began assigning My most loyal slaves sessions that involved play with their own scat.

Still, I began deeply questioning why giving hardsports was a limit for Me. I was rattling off My limits in kink groups and finding Myself follow what I now see as an unconscious pattern of repeating what others do in order to preserve some kind of reputation. “Yea, and… no scat.” (“Laugh” “Laugh” within the group). What reputation? Why? Why do so many in the kink community - professional and lifestyle, feel the need to shame the humble scat enthusiasts?
Is this as far as W/we have come as kink lovers?

All of My submissives know that I’ll never shame them for their kinks. And to Me, that’s one of the most important things as a Mistress. 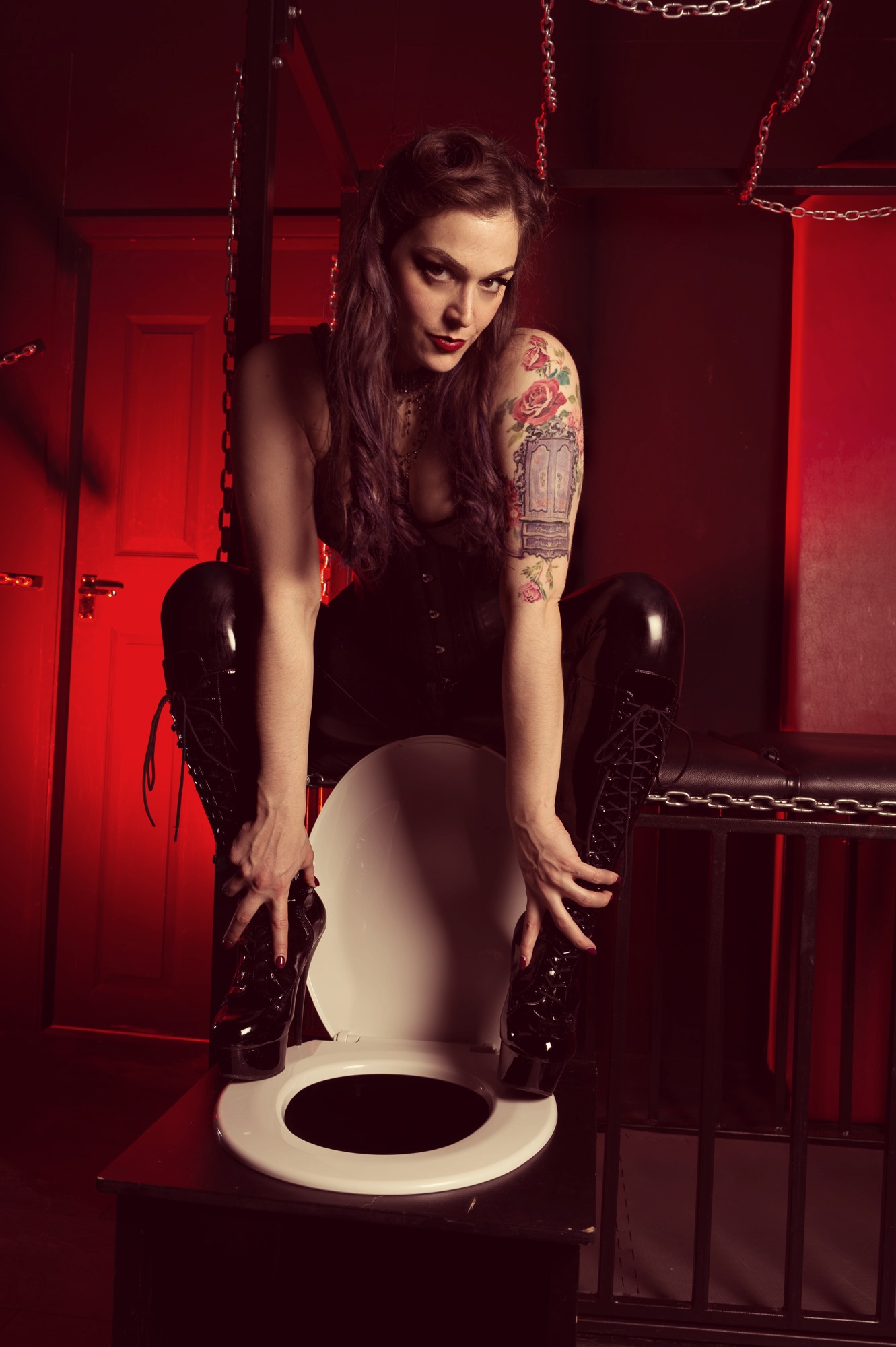 All of My submissives know that I'll never shame them for their kinks. And to Me, that's one of the most important things as a Mistress. Of course there are risks to giving hardsports. The Top should always be healthy. Both Top and bottom should be safe, sane, and consensual.

I learned easily to have toilet slaves abide by the times when My Kaviar dispenser would be up and running. I have My methods of screening them as SSC and it’s been easy to differentiate who is genuine and who isn’t.
But what was the real reason that I didn’t do hardsports?

Shame is the reason I personally believe most Dommes won’t even consider venturing into giving hardsports. Once I realized that the main opposition to Me doing hardsports was shame, I recognized it for the sanctimonious killjoy that it was. The very thing the Catholic Church had tried to beat into Me.

Today I see toilet slavery as a soft fetish (pun intended) - softer than many other requests people message Me for. I’m proud to say that My hardsports sessions are some of My favorite, most creative sessions. The mutual fun Me and My toilet slaves enjoy is priceless. Their opportunity to consume and bask in My Kaviar is divine. To Me it is the purest release of shame, and the highest praise of true Goddess power.

Thanks for subscribing!
Please check your email for further instructions.

Something went wrong. Please check your entries and try again.